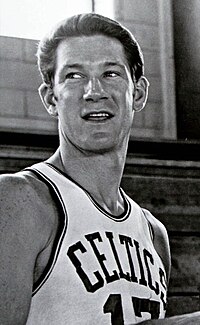 John Joseph "Hondo" Havlicek (April 8, 1940 – April 25, 2019) was an American professional basketball player. He played as a small forward or a shooting guard. He spent 16 seasons (1962–1978) playing for the Boston Celtics in the National Basketball Association (NBA). He won eight NBA championships with the Celtics. Four of his championship wins came in his first four seasons from 1963 to 1966. His other championships came in 1968, 1969, 1974 and 1976. He won a total of 13 NBA All-Star Games. In 1984, he was made a member of the Naismith Memorial Basketball Hall of Fame. He was born in Martins Ferry, Ohio.

Help Improve This Page: Please contact us to become an approved KidzSearch editor and provide your credentials. Provide feedback on this article in our John Havlicek Forum