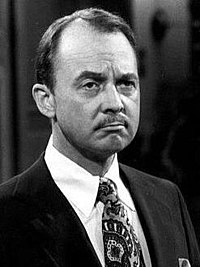 John Benedict Hillerman (December 20, 1932 – November 9, 2017) was an American actor. He was born in Denison, Texas. He was known for his starring role as Jonathan Quayle Higgins III on the television show Magnum, P.I..[1] He starred in Chinatown and Blazing Saddles. He also starred in The Betty White Show. He won a Emmy Award and a Golden Globe Award during his career. He retired in 1999.