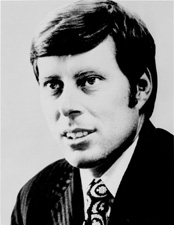 John Varick Tunney (June 26, 1934 – January 12, 2018) was an American politician. He was born in New York City. He studied at Yale University and at the University of Virginia. Tunney served as a member of the United States House of Representatives from California's 38th congressional district from 1965 through 1971.

Tunney defeated then-incumbent United States Senator George Murphy in the 1970 election. He became Senator on January 3, 1971 and would serve until January 2, 1977 when he lost to S. I. Hayakawa in the 1976 election.