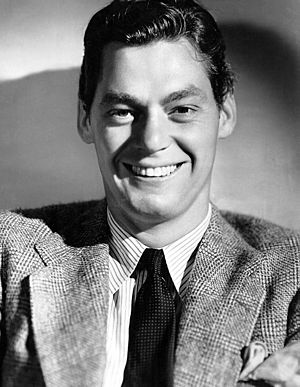 Johnny Weissmuller (June 2, 1904 – January 20, 1984) was a German-American swimmer and actor. He was born in Timisoara, Austria-Hungary to German parents.

He was one of the world's best swimmers in the 1920s. He won five gold medals and set five then-Olympic records in swimming competitions at the Olympics in 1924 and 1928,[1] and a bronze medal in water polo at the 1924 Olympics.

He later played Tarzan in a series of movies in the 1930s and became a movie star. This made him a character actor. He then had trouble getting parts in other movies because of this.

On January 20, 1984, Weissmuller died of pulmonary edema. He was 79. He was buried in Acapulco, Mexico, where he was living when he died.[2] At his funeral, a sound recording of the Tarzan yell he had made famous in the movies was played three times, at his request.[3]