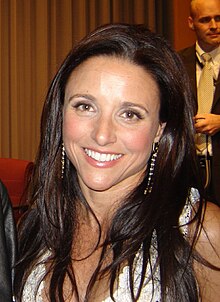 Julia Louis-Dreyfus (born January 13, 1961) is an American actress.[1] Her most well known for starring in the television series Seinfeld. She is also noted for starring in other television programs and in movies. She also starred on the situation comedy Adventures of old Christine.