The French Revolution of 1830, also known as the July Revolution, was the throwing off of Charles X of France from power. His cousin Louis-Philippe, the Duc d'Orléans became king. However, after 18 hard years on the throne, he, also, would be taken off the position of king. It showed the change from one kind of monarchy to another. This change was from the Bourbon Restoration to the July Monarchy. This also marked the change of power from the House of Bourbon to the House of Orléans. People who supported Bourbon would be called Legitimists. Supporters of Louis-Phillipe were called Orleanists. Louis-Philippe was king of the French (not King of France) until the French Revolution of 1848. 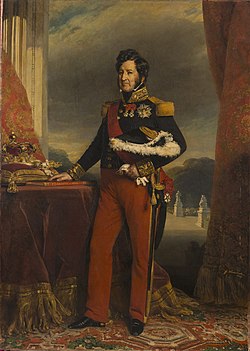 On September 16, 1824, Charles X came to the throne of France. He was the younger brother of Louis XVIII. When Napoléon Bonaparte was defeated, he had become King of France. Both Louis and Charles ruled because of their birth, not because a great number of people wanted them to. This was the first of two things that began Les Trois Glorieuses, the "Three Glorious Days" of the July Revolution.

When Napoleon abdicated in 1814, Europe, and mostly France, was in great confusion. The Congress of Vienna met to draw the continent's political map again. A great number of European countries came to the congress. However, there were four most important powers that controlled the decision. These powers were the United Kingdom, Austria, Russia, and Prussia, represented by King Frederick William III. Another very important person at the Congress was Charles Maurice de Talleyrand. He was a French diplomat under Napoleon. France was considered an enemy state.

Talleyrand suggested that Europe go back to its first, "legitimate" government. He meant the government before Napoleon. This plan was largely accepted by members of the Congress. France went back to its 1789 borders and the House of Bourbon came back to the throne. In the eyes of the Congress, the political situation in France and Europe was now back to normal. However, the new king, Louis XVIII, felt that ideas of nationalism and democracy were still in his country. So, they made and signed the Charte constitutionnelle française, the French Constitution. It is also known as La Charte. This was the second thing that began the July Revolution.

Scenes of July 1830, a painting by Léon Cogniet. This painting was about the July revolution of 1830.

People quickly learned about the Saint-Cloud "ordonnances" from the Le Moniteur. Angrily, workers were fired, and business closed down. Unemployment, which had been growing through early summer, increased. "Large numbers of... workers therefore had nothing to do but protest."[1]

Newspapers such as the Journal des débats, Le Moniteur Universel (Le Moniteur), and Le Constitutionnel had already stopped being put in print. This was because of the new law. Almost 50 journalists from 12 city newspapers met in the offices of the liberal Le National. There they signed a protest, and promised their newspapers would continue to run.[2]

That evening, police came to a news press and took away newspapers that were against the law. An angry, unemployed mob shouted hotly, "A bas les Bourbons!" "Vive la Charte!!" Armand Carrel, a Republican journalist, wrote in the Le National:

"France... falls back into revolution by the act of the government itself... the legal regime is now interrupted, that of force has begun... in the situation in which we are now placed obedience has ceased to be a duty... It is for France to judge how far its own resistance ought to extend."[3]

As if living in a dream world, the Paris Préfet de Police wrote on the evening, " ...the most perfect tranquility (peace) continues to reign (rule) in all parts of the capital. No event ... of attention is recorded in the reports that have come through to me."[4]