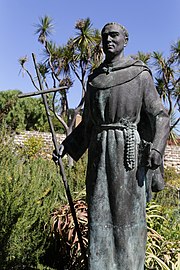 Junípero Serra y Ferrer (November 24, 1713 – August 28, 1784) was a Franciscan friar most well known for founding the first 9 California missions. He was from Majorca in Spain. He was a teacher of philosophy in Spain and Mexico in the 1740s.

In 1768, Serra became head of the missionaries in Baja California, and started the first and only Franciscan mission there. Soon after that, he started Mission San Diego de Alcala, the first Spanish mission in Alta California (now the state of California). Serra started nine missions in Alta California.

He was head of the California missions, and was based in Monterey. There is a statue of him in Statuary Hall in the Capitol, where he represents California. He was beatified by Pope John Paul II in 1988 and canonized (made a saint) in 2015 by Pope Francis. Serra is often called the "Father of California" due to the role of the missions in establishing European rule in what is now the state of California. However, some people are now criticizing him for the way he treated Native Americans. [6][7]

Junipero Serra was born in Petra, a village on Majorca in the Balearic Islands. His name at birth was Miquel Josep Serra i Ferrer, which is Catalan.

At age 17, Serra joined the Franciscan order of monks.

Work in the Americas

Serra often punished himself in order to cleanse his soul of sins. He whipped himself.

On July 1, 1769, Serra arrived in what is now San Diego. He started Mission San Diego de Alcala. A mission is a religious community where the Spanish taught the Native people about their religion, Catholicism.

Serra started a total of nine missions. They are:

These missions were an important part of Spanish rule because if a mission was built in a place, it would be harder for other European countries to claim that land for themselves.

In these missions, the Native Americans were taught European ways. They learned how to speak Spanish and the basics of the Catholic faith. They also farmed and made things such as candles and clothes. However, some Native Americans did not like living in the missions. They thought the Spanish were treating them wrong and they fought back.

Serra died at Mission San Carlos Borromeo de Carmelo in what is now Carmel-by-the-Sea, California. He is buried there. People go to his grave to pray in his name.

Serra was beatified by Pope John Paul II in 1988. When he was beatified, it means that the Catholic Church recognizes that he went to heaven and can intercede on behalf of people who pray in his name. He was also now called "Blessed." However, he was not a saint yet because beatification is step 3 out of the 4 steps of becoming a saint in the Catholic Church.

In 2015, Pope Francis canonized Serra. That means that he is now officially recognized as a saint in the Catholic Church and has his own feast day (July 1 in the United States, August 28 everywhere else). July 1 is his feast day in America to honor the day he arrived in San Diego.

There are many statues of Junipero Serra in California. There are also many places named after him, such as schools and roads.

People have criticized Junipero Serra for his treatment of the Native people who live in what is now the state of California. They said that he beat them up and didn't allow them to practice their own cultures and religions. However, other people say that Serra did a lot of good things for the Native people. Unlike other Europeans at the time, he thought that the Native Californians had souls. He also taught them how to read and write.

In 2020, many statues of Junipero Serra were damaged and pulled down. Other statues of him have been removed and put away. These events have taken place in light of the George Floyd protests, when people were working to end racism in American society.