In this Japanese name, the family name is Asakawa. 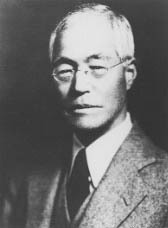 He was born in Nihonmatsu, Japan. He studied at Waseda University in Tokyo.

In 1907, Asakawa was appointed curator of the East Asian Collection at Yale's Sterling Memorial Library.[3]

Asakawa was an instructor at Yale from 1907 through 1910 when became an assistant professor. He became the first Japanese professor at a major American university. He taught history at Yale for 35 years.[3] Among those he influenced was John Whitney Hall.[4]

After the end of the Russo-Japanese War, Asakawa began to speak out against the growth of militarism in Japan. In 1941, he tried to prevent war between the US and Japan.[5]

In an overview of writings by and about Kan'ichi Asakawa, OCLC/WorldCat includes roughly 110+ works in 220+ publications in 5 languages and 2,400+ library holdings.[6]

His works also included contributions to the publications Japan edited by Frank Brinkley (1904); the History of Nations Series (1907); China and the Far East (1910); Japan and Japanese-American Relations (1912); and The Pacific Ocean in History (1917).

Asakawa lived most of his life in the United States. In the history of the Japanese-Americans, he is considered among the Issei who were immigrants born in Japan.[8]

In 2007 the Asakawa Japanese garden at Yale, designed by Shinichiro Abe, was dedicated to mark the centennial of Asakawa's appointment as an instructor of history at Yale.