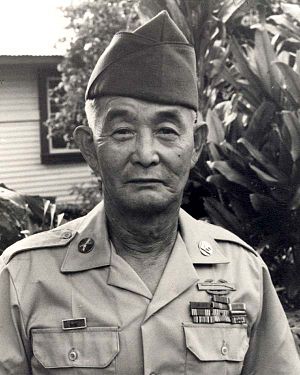 In this Japanese name, the family name is Moto.

Moto was born in Hawaii to Japanese immigrant parents. He is a Nisei, which means that he is a second generation Japanese-American.[1]

Ten months before the Japanese attack on Pearl Harbor, he joined the US Army in March 1941.[3]

Moto volunteered to be part of the all-Nisei 100th Infantry Battalion.[4] This army unit was mostly made up of Japanese Americans from Hawaii and the mainland.[5]

For his actions in July 1944, Moto was awarded the Army's second-highest decoration, the Distinguished Service Cross (DSC). In the 1990s, there was a review of service records of Asian Americans who received the DSC during World War II. Moto's award was upgraded to the Medal of Honor. In a ceremony at the White House on June 21, 2000, his family was presented with his medal by President Bill Clinton. Twenty-one other Asian Americans also received the medal during the ceremony, but only seven of them were still alive.[6]

Moto's Medal of Honor recognized his conduct in frontline fighting in central Italy in 1944.[2] Without help from others, he attacked two machine guns; and, although he was wounded, he captured a third machine gun nest.[7]

Acting on his own, Moto silenced two enemy machine gun positions while acting as a scout. He also destroyed a third even though he was seriously wounded.

The words of Moto's citation explain: