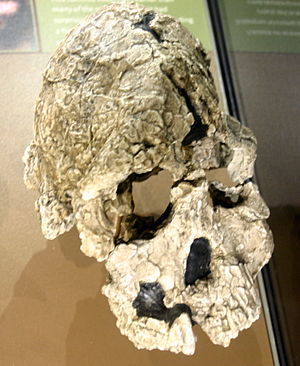 Kenyanthropus platyops is an extinct hominid species discovered in Lake Turkana, Kenya in 1999. It was by Justus Erus, who was part of Meave Leakey's team.[1]

The fossil 3.5 to 3.2 million year old. It has a broad flat face with a toe bone that suggests it probably walked upright. Teeth are intermediate between typical human and typical ape forms.

If some palaeoanthropologists are correct, Kenyanthropus may not even represent a valid taxon. The specimen is so distorted by matrix-filled cracks that meaningful morphological characteristics are next to impossible to assess with confidence.