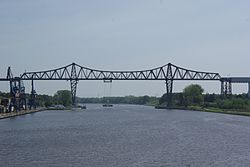 The Kiel Canal is a waterway in the German state of Schleswig-Holstein. The canal connects the North Sea from the River Elbe to the Baltic Sea at Kiel.[1] The Canal is about 100 kilometres (62 mi) long.[1] The canal was first opened to traffic on 19 June 1895.[2] It was then improved to allow the largest warships to pass through. The formal reopening of the improved canal was on June 24, 1914.[2] The Kiel Canal is the busiest artificial waterway for seagoing ships worldwide. In 2014, 32,600 ships passed through the waterway.[3]