The kilogram[b] is the base unit of mass in the International System of Units (SI). It is in widely used in science, engineering, and commerce worldwide. The kilogram is exactly the mass of one litre of water.

As of May 20, 2019, the definition of the kilogram is based on the Planck constant as Error in {{val}}: exponent (e) is not a valid number or requires too much precision to display..[1][2]

There are attempts to define the kilogram in other ways. One example specifies a number of atoms of a certain substance (at a certain temperature).

In 1879, the piece of metal was made. It was officially chosen to be the kilogram in 1889. It was made of 90% platinum and 10% iridium.[3] Those metals were chosen because they do not rust or corrode like most metals. It is stored in a vault at the BIPM in Sèvres, France. From 1795 to 1799, the unit of mass was not called "kilogram" but was called "grave".

The original kilogram is kept inside bell jars. Over time, dust can collect on it. Before it is measured, it is cleaned to get the original size.[3] 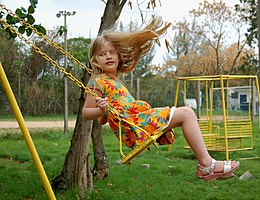 The chains on the swing hold the child’s weight. If one were to stand behind her and try to stop her, one would be acting against her inertia. This inertia comes from her mass, not weight.

The kilogram is a unit of mass. In normal language, measuring mass defines how heavy is something. This is not scientifically correct. Mass is an inertial property. It measures the tendency of an object to stay at a given speed when no force acts on it.

Sir Isaac Newton's laws of motion contain an important formula: F = ma. F is force. m is mass. a is acceleration. An object with a mass (m) of one kilogram will accelerate (a) at one meter per second per second when acted upon by a force (F) of one newton. This about one-tenth the acceleration due to earth’s gravity.[c]

The weight of matter depends on the strength of gravity. The mass of matter does not. The mass of an object is the same everywhere. Matter has invariant mass assuming it is not traveling at a relativistic speed with respect to an observer. According to Einstein’s theory of special relativity, the relativistic mass (apparent mass with respect to an observer) of an object or particle with rest mass m0 increases with its speed as M = γm0 (where γ is the Lorentz factor). This effect is vanishingly small at everyday speeds, which are by orders of magnitude less than the speed of light, but becomes noticeable at very high speeds. For example, traveling at just 10% the speed of light with respect to an observer—exceedingly fast compared to everyday speeds (about 108 million kilometres per hour or 67,000,000 mph[convert: %s]%s)—increases an object’s relativistic mass just over 0.5%.

As regards the kilogram, relativity’s effect upon the constancy of matter’s mass is simply an interesting scientific phenomenon that has zero effect on the definition of the kilogram and its practical realizations.</ref> Objects are "weightless" for astronauts in microgravity. However, the objects still have their mass and inertia. Astronaut must use ten times as much force to accelerate a ten-kilogram object at the same rate as a one-kilogram object.

A common swing, as shown in the picture, can show the relationship of force, mass and acceleration. Someone could push an adult on the swing. The adult would accelerate slowly. They would only swing a short distance forward before the swing would change direction. If a child is sitting on the swing, then the child would swing forward faster and further.