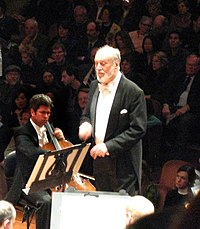 Kurt Masur (18 July 1927 – 19 December 2015) was a German conductor. He conducted many of the world’s leading orchestras. He especially likes conducting German Romantic music.

Masur was born in Brieg, which was then part of Germany but is now called Brzeg and lies in Poland. He studied piano, composition and conducting in Leipzig.

His first important conducting job was with the Dresden Philharmonic Orchestra, with whom he worked from 1955 to 1958 and again from 1967 to 1972. He also worked with the Komische Oper of East Berlin. From 1970 to 1996 he was the Kapellmeister (musical director) of the famous Gewandhausorchester Leipzig.

Dresden and Leipzig both lie in what used to be the German Democratic Republic (East Germany). For years Masur worked faithfully for the communist leaders of that country. When the political situation started to change in 1989, he helped to keep the demonstrations peaceful by talking to the politicians and the people and stopping them from fighting.

In 1991, Masur became music director of the New York Philharmonic. He stayed there for over a decade, helping to make them one of the world’s finest orchestras.

From 2000 to 2007, Masur was principal conductor of the London Philharmonic Orchestra,. From 2002 to 2008, Masur was music director of the Orchestre National de France.

On his 80th birthday (18 July 2007), Masur conducted musicians from both these orchestras at a Proms concert in London, conducting music by Tchaikovsky and Bruckner.

Masur enjoyed working with young musicians, conducting youth orchestras and giving masterclasses. He has given lessons on the art of conducting Beethoven’s music.

Masur has been married three times. His first wife, with whom he had a daughter, died in 1972 in a car accident. Masur himself was badly injured in that accident. Until his death, he lived with his third wife, Tomoko. They have a son, Ken-David, who has also become a conductor.

On 26 April 2012 Masur fell off the podium while he was conducting the National Orchestra of France at a concert in Paris. He was taken to hospital to recover from his injuries.[1]