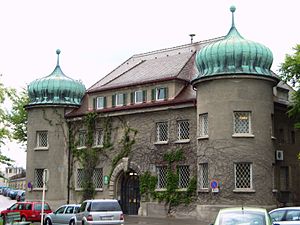 Entrance of the Landsberg Prison

Landsberg Prison is a prison in the town of Landsberg am Lech in the southwest of the German state of Bavaria. It is about 45 kilometres (28.0 mi) west of Munich.

The Landsberg Prison was built around 1910 on the town's western edge. Its most noted prisoner was Adolf Hitler. Hitler was there in 1924 after being found guilty of treason for his part in the Beer Hall Putsch. It was during his time at Landsberg that Hitler wrote his book Mein Kampf (My Struggle) with help from Rudolf Hess. During the occupation of Germany by the Allies after World War II, the US Army named the prison as "War Criminal Prison No. 1".[1] They held many Nazi war criminals there. Executions of war criminals were also done at Landsberg. The last of these executions happened on June 8, 1951. These were the last executions in the Federal Republic of Germany, then commonly known as West Germany.