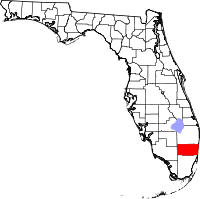 Lauderhill is a town in south Florida.

Lauderhill is located in Broward County, ten miles from the Atlantic Ocean.

As of the 2010 census, the population of Lauderhill was 66,887. It is part of the Greater Miami Metropolitan Statistical Area, which was home to 5,564,635 people at this census.

Nearly 60% of the population is black, with a huge presence of Jamaicans just immigrated in the last 30 years. Nearly 25% are white, mostly old people retired from New England.