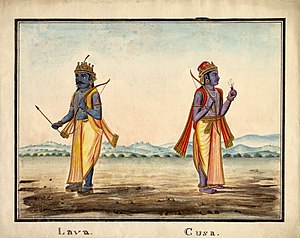 Lava and Kusha, the sons of Rama

Lav or Lava, in Hindu mythology, was the son of the deity and hero Rama (see the classical Indian epic poem Ramayana) and his wife, Sita. According to legend, Lav founded the ancient South Asian city of Lahore, now in Pakistan; while his brother Kash, or Kashava, founded the nearby city of Kasur.