In this Korean name, the family name is Lee. 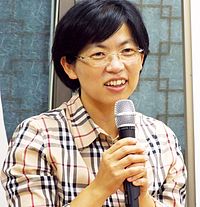 In 1996, Lee passed the 38th lawyers exam. She became more active in advocating freedom, human rights, women rights. In 2006, Lee joined the Democratic Labor Party. In 2008, she was elected to the 18th session of the Korean National Assembly.

In 2007 she joined the Democratic Labor Party.