The Serval (Leptailurus serval) is a species of wild cat which lives in Africa. It is the largest species in its genus.

Its adult length is about 32 inches (body) and 16 inches (tail) and weighs about four pounds.[3] There are a number of subspecies, and its geographical range is from the Cape of South Africa to Algeria, wherever the circumstances are right for it.

It is lightly built, with very large ears and long legs. The back of the ears is black with a big white spot, and the tip of the tail is black. These signs probably serve as signals to other servals.[3]

The serval needs access to water, and dense grassland. Reed beds, scrub or high grass are typical habitats. It is territorial.[3] 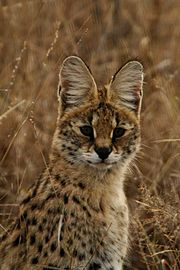 A serval from the Sabi Sands area of South Africa. Note the large ears adapted for hearing small prey.

The serval is nocturnal, and hunts mostly at night. Although the serval is specialized for catching rodents, it is an opportunistic predator whose diet also includes birds, hares, hyraxes, reptiles, insects, fish, and frogs.[4] Over 90% of the serval's prey weighs less than 200 gm (7 oz).[5]

As part of its adaptations for hunting in the savannas, the serval has long legs (the longest of all cats, relative to body size) which help it achieve a top speed of 80 kilometres per hour (50 mph), and has large ears with acute hearing. Its long legs and neck allow the serval to see over tall grasses, while its ears are used to detect prey, even those burrowing underground. Servals have been known to dig into burrows in search of underground prey, and to leap 2 to 3 metres (7 to 10 ft) into the air to grab birds in flight.[6]

It is the highest jumper of all cats relative to its body size. It feeds mostly on rodents, such as mice and rats, although it has been known to catch birds while they are flying in the air. Using its spectacular jumping ability, the serval leaps into the air and bats the bird with its front paws. When the bird is on the ground, it bites its neck, killing it.