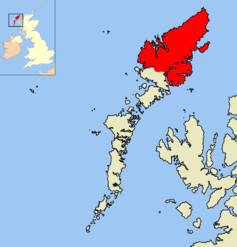 Lewis is the northern part of Lewis and Harris, the largest island in the Western Isles (or Outer Hebrides) of Scotland.

Its biggest town is called Stornoway, which has a population of over 5000. Most people on the island speak Gaelic. On the island, there is a town called Barvas, which is the place which has the biggest percentage of Gaelic speakers (74.7% of the people speak Gaelic).