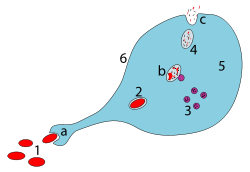 Steps of a macrophage ingesting a pathogen:
a. Ingestion through phagocytosis, a phagosome is formed
b. The fusion of lysosomes with the phagosome; the pathogen is broken down by enzymes
c. Waste material is expelled or assimilated (the latter not pictured)
Parts:
1. Pathogens
2. Phagosome
3. Lysosomes
4. Waste material
5. Cytoplasm
6. Cell membrane


Macrophages[1] are white blood cells within tissues, produced by the differentiation of monocytes.[2]

Their role is to phagocytose (engulf and then digest) cellular debris and pathogens either as stationary or as mobile cells. They also stimulate lymphocytes and other immune cells to respond to the pathogen,

When a monocyte enters damaged tissue through the wall of a blood vessel it changes to become a macrophage. Monocytes are attracted to a damaged site by chemical substances, triggered by a range of stimuli. At some sites such as the testis, macrophages have been shown to populate the organ through proliferation.

Unlike short-lived neutrophils, macrophages survive longer in the body, up to several months.