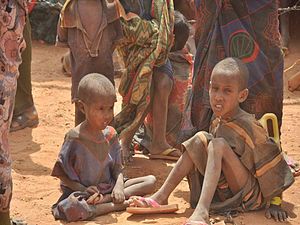 Malnourished children in Somalia in 2011.

Malnutrition is eating a diet which does not supply enough nutrients. There are two broad cateogries of malnutrition:

Sometimes, people need to lose weight, and eat according to a special diet. This is usually not called malnutrition.

Malnutrition is considered a more scientific and official term than starvation which has negative associations. Malnutrition is not, however, simply a matter of eating too little. Someone can be malnourished if they eat an unhealthy diet. This can be cured by eating a proper balanced diet.

Children whose daily diet contains less carbohydrate and protein do not grow well. They do not gain weight. Their hands and legs appear as skin and bones. They cry all the time with hunger. They are not active and have sunken eyes. Such children often fall sick. Lack of a particular vitamin is another kind of malnutrition which can cause a particular deficiency disease, such as beriberi and rickets.

Malnutrition becomes a bigger problem during famine because most of the people do not get enough food, hence increasing the death rate.