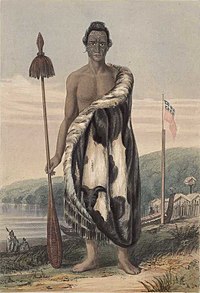 Te Puni, a Māori chief of the 19th-century

The Māori are the first people to live in New Zealand.

Their Polynesian ancestors came to New Zealand between 800 and 1200 AD. Where the Maori arrived from is still unclear and there are many theories, but one of them is that they arrived from somewhere in tropical Polynesia, perhaps from the Cook Islands or the Society Islandshaka. About 600,000 Māori live in New Zealand today.

During World War II, Māori soldiers were famous as brave warriors because they won many difficult battles and stayed strong in the face of danger.