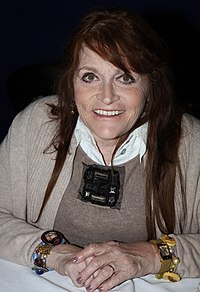 Margaret Ruth Kidder (October 17, 1948 – May 13, 2018) professionally known as Margot Kidder, was a Canadian-American actress and activist. She was known for her role as Lois Lane in the 1978 movie Superman and the eventual other movies within the movie series, alongside Christopher Reeve.

Kidder also starred in Brian De Palma's cult thriller Sisters (1973); in the slasher movie Black Christmas (1974); and the dramas The Great Waldo Pepper (1975); The Reincarnation of Peter Proud (1975). She starred as Kathy Lutz in The Amityville Horror (1979).

Kidder suffered from paranoia and bipolar disorder which caused her to suffer from mental breakdowns and temporarily retire a few times.[1] In April 1996, Kidder went missing for four days in Los Angeles and was found at a backyard of a house after she was nearly raped.[2]

Kidder was in a car crash in December 1990, after which she was unable to work for two years, causing her financial problems.[3]

In 1978, Kidder won a Saturn Award for Best Actress for her Lois Lane role. In 2015 Kidder won an Emmy award for Outstanding Performer in Children's Programming for her performance in R.L. Stine's The Haunting Hour.[4]

In 2005, Kidder became a naturalized U.S. citizen. In later years, Kidder became an outspoken political, environmental, and anti-war activist.[5] She endorsed Senator Bernie Sanders for President of the United States in 2016.[6]