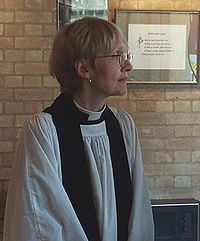 Marilyn McCord Adams (October 12, 1943 – March 22, 2017) was an American philosopher and priest of the Episcopal Church. She specialized in philosophy of religion, philosophical theology and medieval philosophy.

Adams is known for writing her 1999 persuasive narrative Horrendous Evils and the Goodness of God.

Adams was born on October 12, 1943 in the United States. She studied at University of Illinois, at Cornell University, at Princeton Theological Seminary and at Oxford University. She married philosopher Robert Merrihew Adams from 1966 until her death in 2017.