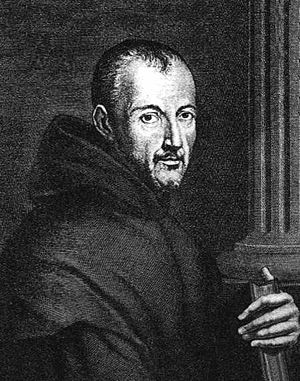 Marin Mersenne, (born 8 September 1588, in modern-day Sarthe, died 1 September 1648, in Paris) was a French theologian and mathematician. He developed the first laws of acoustics, which was known by his name for a long time. Today, he is mainly remembered for the Mersenne primes. Together with Galileo Galilei he built the laws which describe how a mass falls in an empty space. He was in favour of modern science, and did not agree with "occultist" movements.

He often travelled to meet great scientists, which made him an important mediator. This is especially true for mathematicians such as Pierre Gassendi, Gilles Personne de Roberval, Blaise Pascal und Pierre de Fermat. To tell Mersenne of a discovery was like publishing it. He told Gassendi to reply to the Meditations of Descartes. Mersenne gave Huygens the idea of using a pendulum to measure time. This led to the development of pendulum clocks.