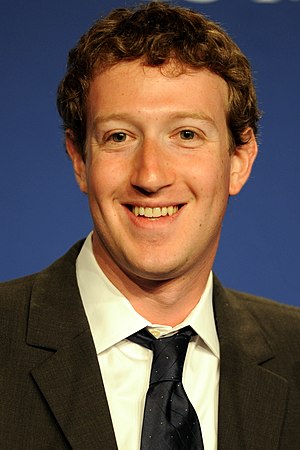 Mark Zuckerberg (born May 14, 1984) is a former Harvard University student who created Facebook when he was still studying computer science.[1] The founding of Facebook made Zuckerberg a billionaire, one of the youngest ever and richest youngest billionaire according to Forbes. Besides computer programming, Zuckerberg is also interested in foreign language. Zuckerberg was born in White Plains, New York but he now lives in California. His founding of Facebook was portrayed in the movie The Social Network. In 2010, he said that he was going to give most of his money to charity. In 2010, he was also named Time's Person of the Year. He was raised Jewish, but is now an atheist.[2]