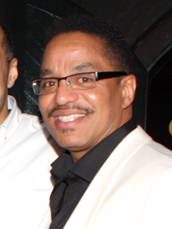 Marlon Jackson (born March 12, 1957) is an American singer and musician. He was a member of the boy band The Jackson 5. In 1980 he appeared on his sister La Toya Jackson's first album. This was his first music outside of The Jackson 5. In 1987, he released a solo album, Baby Tonight.[1] Unlike his brothers, he did not continue to work in music after this apart from the 1989 single "2300 Jackson Street" with The Jacksons.

Marlon joined The Jackson 5 as a percussionist. He was later a singer for the group. He also played the conga and tambourine. In 1968 The Jackson 5 were signed to Motown Records. They released their first single "I Want You Back" in 1969. It reached number one in the United States. Their next three singles also went to number one. The band have sold 150 million records. In 1997 the band were given a star in the Rock and Roll Hall of Fame.