Maynard James Keenan (born James Herbert Keenan on April 17, 1964) is an American rock singer, songwriter, musician, and producer. He sings in the band Tool, and also in the band A Perfect Circle. He has a side project called Puscifer.

James Herbert Keenan was born in Ravenna, Ohio on April 17, 1964. His mother is Judith and his father is Michael, who was a high school teacher. Keenan's parents divorced when he was three years old, and Michael moved away. Keenan did not see him very much for the next 12 years. Later, his mother married someone else. He was mean and did not allow Keenan to be creative.[1] When Keenan was 11, his mother, Judith, had a brain aneurysm that paralyzed her. Two years later, she told Keenan to move to Michigan with his father. 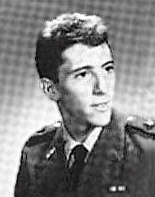 Keenan joined the United States Army after he graduated from high school. He wanted to use the G.I. Bill to go to art school. He joined the United States Military Academy Preparatory School (West Point Prep School) where he picked up the nickname "Maynard".[2] He did very well in his training,[3] but said no to an offer to stay in the Army and work at West Point. He decided to start his music career instead.

After being honorably discharged from the Army, Keenan went back to Michigan to go to art school. Then, in 1988, he moved to Los Angeles, California to help design the inside of pet stores.[4] He was fired from this job and then worked creating movie sets.[5] He also played bass guitar in a band and sang for another band.

Keenan started playing soon after leaving art school. Then he and Adam Jones formed Tool. They have a thing for releasing albums every five years. They did so with Undertow, Ænima, and 10,000 Days. Keenan left and formed A Perfect Circle. They had 3 albums, Mer De Noms, The Thirteenth Step, and eMOTIVe. He then left again to go and pursue family time. He now has a vineyard where he makes fine wine but still takes tours for his working side project; Puscifer... Tool's new album had officially set to release August 30th, 2019