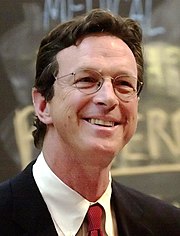 Michael Crichton (October 23, 1942 – November 4, 2008) was an American author of many books. He was also a producer, director, and doctor. Crichton is well known for Jurassic Park, a book that became a film series. He also wrote books such as Prey and The Lost World. Crichton has also created the E.R. television show. Crichton was born in Chicago, Illinois. He was 6'9" tall. He was married five times. He had a daughter from his fourth marriage.

In November 4, 2008, he died of throat cancer and lymphoma in Los Angeles, California, aged 66. He was looked down on by some as a climate change denier[1] In February 2009, his widow gave birth to his only, posthumous son, John Michael Todd Crichton.

Help Improve This Page: Please contact us to become an approved KidzSearch editor and provide your credentials. Provide feedback on this article in our Michael Crichton Forum