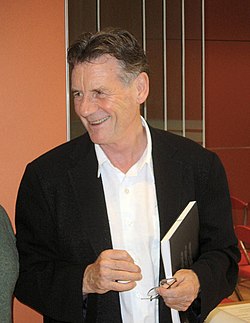 Michael Palin (born 5 May 1943) is an English actor, comedian, world traveller and author.

He became famous as a member of Monty Python in the 1970s. Afterwards he had his own television series, Ripping Yarns, and also appeared in many movies, such as A Fish Called Wanda. Over the last 20 years, he has become very well known as a television travel broadcaster ("Around The World in 80 Days", etc.).