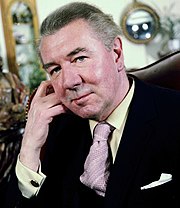 Sir Michael Scudamore Redgrave CBE (20 March 1908 – 21 March 1985) was an English stage, voice, radio, television and movie actor, movie director, manager and writer who is known for his roles in The Lady Vanishes, Dead of Night, The Browning Version, The Dam Busters, Secret Beyond the Door..., and in Mourning Becomes Electra.

Redgrave was born on 20 March 1908 in Bristol, Gloucestershire.[1] Redgrave was educated at the Magdalene College, at Cambridge, Clifton College, and at the University of Cambridge. Throughout his life, Redgrave was bisexual.[2] He was married to Rachel Kempson from 1935 until his death in 1985. They had three children, Vanessa Redgrave, Corin Redgrave, and Lynn Redgrave. Redgrave died on 21 March 1985 in Denham, Buckinghamshire from Parkinson's disease, aged 77.