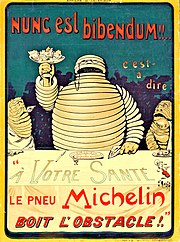 The Michelin Guide (French: Guide Michelin) is a series of annual guide books published by the French company Michelin for over a century. It lists good restaurants and hotels.

The term normally refers to the Michelin Red Guide, the oldest and best-known European hotel and restaurant reference guide. A team of experts gives Michelin stars for excellence to a select few establishments. The gain or loss of a star can have a big effect on the success of a restaurant.[1][2]

The guides cover western Europe in detail, major cities in the USA, Japan and Hong Kong Macau. Michelin was and is a tyre company, and the guides were originally meant to be packed in the car as you went touring through France. That is why they cover hotels as well as restaurants.