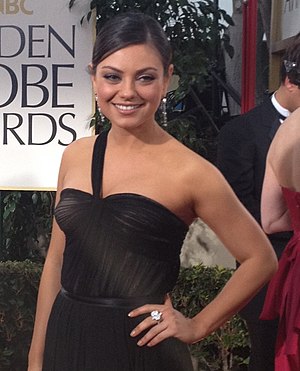 Milena Markovna "Mila" Kunis (Ukrainian: Мілена Марківна Куніс; born August 14, 1983 in Chernivtsi,[1][2][3] Ukrainian SSR, Soviet Union) is a Ukrainian-American actress. She moved to Los Angeles in 1991. Her first acting role was in 1995. She is best known for playing Jackie Burkhart on the sitcom That '70s Show. She also plays the voice of Meg Griffin on Family Guy. Lacey Chabert played Meg Griffin in the first season, but Mila Kunis plays Meg Griffin now. She has been in a relationship with Ashton Kutcher since April 2012.[4] The couple became engaged in February 2014. Their daughter was born in September 2014.