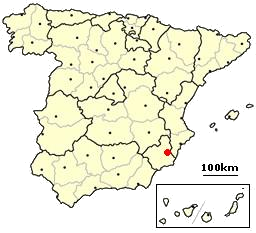 Murcia (red dot) on a map of Spain 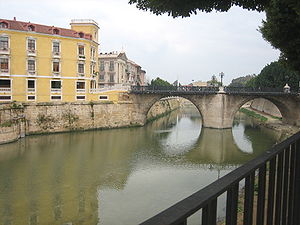 Old bridge over the river

Murcia is the capital of the autonomous community of Murcia, in Spain, and its biggest city, with a population of 410,000 in the city and more than 740,000 in the metropolitan area. The municipality is the seventh largest in Spain. The city is in the Segura Valley, in an area called la Huerta de Murcia, which is a very important agricultural center with oranges, lemons, tomatoes, onions, etc.; the varied fruits and vegetables typical of the Mediterranean lands. The city has a Baroque cathedral and a university.