Naiad or Neptune III is the closest moon to Neptune named after the Naiads of Greek legend. It was found sometime before mid-September, 1989 from the images taken by the Voyager 2 probe. The last moon to be discovered during the flyby, it was designated S/1989 N 6. Naiad is not a sphere and probably has not been changed by any internal geological processes after its formation. It orbits about 23,500 km above Neptune's cloud tops.

Since the Voyager 2 flyby, the Neptune system has been studied a lot from ground-based observatories and the Hubble Space Telescope as well. In 2002-03, Keck telescope looked at the system using adaptive optics and detected easily the biggest four closer satellites. Thalassa was found with some image processing, but Naiad was not located. 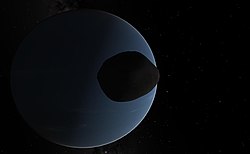 A simulated view of Naiad orbiting Neptune with the Sun in the distance.

Help Improve This Page: Please contact us to become an approved KidzSearch editor and provide your credentials. You can also give immediate feedback in our (moon) Wiki Feedback Forum.