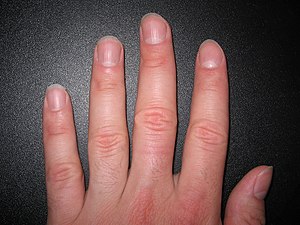 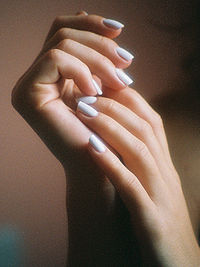 A nail is a hard part of the body at the tip of the fingers and toes, of which most people have ten. Toenails and fingernails are similar, except that toenails grow four times more slowly. Only certain mammals have nails: mostly, they are found in primates. They are made of the same kind of material (keratin) as the claws of other animals.

Like hair, nails never stop growing. They must be cut from time to time. It does not hurt when people cut their nails as they are not innervated. The nails are made up of a protein called keratin which also makes up the main element of hair and skin. People paint their nails to make themselves look more attractive, usually females. On occasion nails can grow into the skin acting as a nidus of infection known as an ingrowing nail. They can hurt, so are often treated through medicine. The cutting and painting of the nails is called a manicure.

The functions of nails are not obvious.[1] They include: