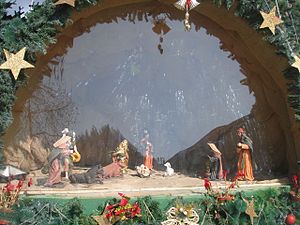 Nativity scene in Nazareth, Orthodox Church of the Archangel Gabriel over source Mary (2014)

A nativity scene is a three-dimensional depiction of the Nativity of Jesus. It is also called a crib, manger, or crèche. Typically, a large scale scene includes the Holy Family, angels, the Magi, the ox and the ass, and an assortment of shepherds, villagers, servants, and others.

There are two types of scenes: static representations of figures made of clay or other material and living scenes. Static scenes are often displayed on a table top in the home. In living scenes, humans and animals portray the characters in the scene.

St. Francis of Assisi is said to have created the first nativity scene in 1223 (a "living" one) near Greccio, Italy.[1][2] It was a "hit". The scene's popularity inspired communities throughout Catholic countries to stage similar scenes.

In the modern world, nativity scenes have provoked controversy. Animals are said to be abused in living scenes and objections have been placed against static scenes displayed on public lands. In addition, outdoor scenes are often the target of vandals. Theft or destruction of outdoor figures is not uncommon.