KidzSearch Safe Wikipedia for Kids.
Jump to: navigation, search
This article is about physical vandalism. For the vandalism-related policy on Wikipedia, see Wikipedia:Vandalism. 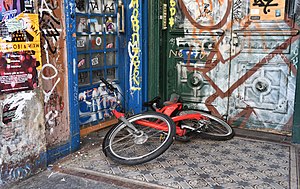 Vandalism is a crime that is done by destroying or damaging the property of someone else. This can include graffiti and website damage.

A person that does this is called a vandal. The name comes from the Vandals, a tribe that attacked and damaged the city of Rome in 455 CE. 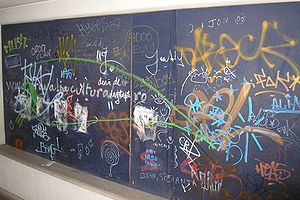 An example of vandalism as an "art"

Many websites, such as wikis (like Wikipedia), forums, and blogs, can be changed by anyone. Because of this, they can be "vandalized" by adding comments or replacing everything on the page with spam, nonsense or other silly content. It is a kind of trolling, and these websites have special users, called administrators, whose job is to remove the vandalism and to block users who do not stop vandalizing.