A plan view of a cathedral: the coloured area is the nave 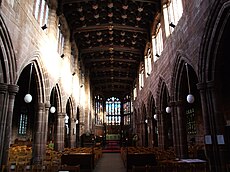 The nave is where the congregation sits in a church. It usually has long benches, called 'pews', or separate chairs.

Naves are found in humble Saxon churches, and in grand Romanesque and Gothic Christian Abbeys, Cathedrals, and Basilicas.

The nave is the central approach to the high altar, the main body of the church. 'Nave' (Medieval Latin navis, "ship") was probably suggested by the shape of its vaulting resembling an upside-down hull (bottom of a ship).

[1] The nave of a church goes from the entry hall to the chancel. It is flanked by aisles separated from the nave by an arcade.[2] If the aisles are high and of a width comparable to the central nave, the structure is sometimes said to have three naves.