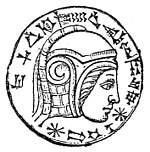 Nebuchadnezzar II on a coin.

Inscription of King Nebuchadnezar II at the Ishtar Gate. An excerpt says: "I (Nebuchadnezzar) laid the foundation of the gates down to ground water level and had them built out of pure blue stone. Upon the walls in the inner room of the gate are bulls and dragons and thus I adorned them with luxurious splendour for all mankind to behold in awe."

According to the Bible, he conquered Judah and Jerusalem, and sent the Jews into exile. He is featured in the Book of Daniel and is mentioned in several other books of the Bible. He (allegedly) destroyed Solomon's Temple.

He is said to have built the Hanging Gardens of Babylon. The king built the hanging gardens in attempt to please his wife. His kingdom had a great flow of trade and prosperity. However, some scholars argue that the Gardens may have been constructed by the Assyrian king Sennacherib in his capital city, Nineveh.[1][2]