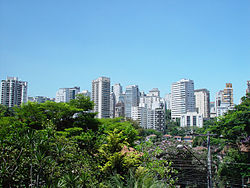 A neighbour of São Paulo.

A Neighbour (or neighbor in American English) is a person who lives nearby, normally in a house or apartment that is next door or, in the case of houses, across the street. Some people form friendships with their neighbours, and help them by sharing their tools and helping with gardening tasks. Other people become frustrated with their neighbours, if the neighbour makes a lot of noise or makes messes.