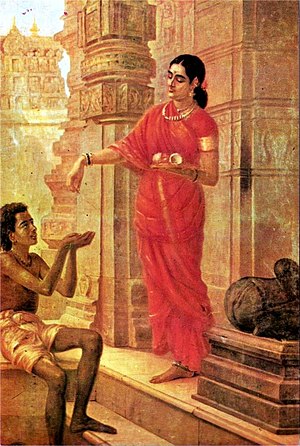 Charity is the act of giving help to those in need of it. It is a humanitarian act. It involves giving money, goods or time and effort to those who need it. It is done without expecting something in return. Giving money or food to poor people is an example of charity. Poor, sick or injured people are generally considered the proper people to whom charity should be given. When such people are not supported, they often begin begging, which is directly asking for help from people they do not know.[1] Others may rely on support from charitable organisations. These organisations collect money and goods and then give them to those in need.

Most charities are concerned with providing basic needs, such as food, water, clothing, health care and shelter. The most common form of charity is donating money. The money is then used to buy these basic needs. However, there are many other actions that may be performed as charity, such as teaching orphans, donating blood, or money to help fund medical research.

Charitable giving can be a responsibility in many religions. This kind of charity is called almsgiving or alms. In Islam, for example, it is called zakat. It is one of the five most important duties of being a Muslim.