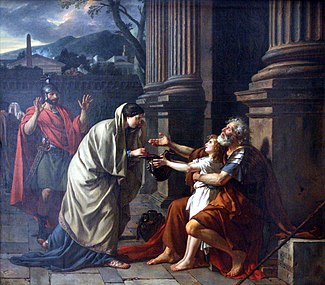 Giving to the poor is considered an altruistic action in many cultures and religions.

Altruism (or selflessness) is concern for the well-being of others. A truly altruistic act is something done completely for the benefit of another, without concern for the self. It usually involves sacrificing something (time, effort or possessions), with no expectation of receiving anything in return (including recognition for the act of giving). It is considered a virtue in many cultures and a basic aspect of most religions. It is the opposite of selfishness.

Altruism is different from acts done out of responsibility, loyalty or moral obligation towards a specific individual (such as a god, a king or a government). Whether "pure" altruism is possible has been debated by scholars for thousands of years. One theory says that no act of giving, helping or sacrificing can be described as truly selfless, because the person will receive personal gratification from it (that is, a feeling of satisfaction that they have done something good for another). Whether this theory is correct depends on whether such feelings qualify as a 'reward' or 'benefit'.

The concept of altruism has long been studied in philosophy and ethics. The term was originally used in the 19th century by sociologist and philosopher of science, Auguste Comte. It has become an important topic for psychologists (especially those that study evolutionary psychology), evolutionary biologists and ethologists. The scholars of each field have developed different ideas about altruism. All agree that altruism is caring about the welfare of other people and acting to help them. 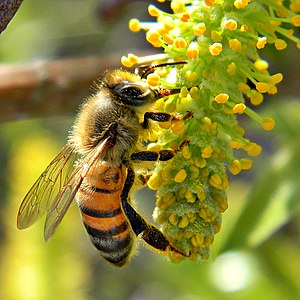 In the animal kingdom, worker bees demonstrate altruism when they attack other animals that threaten the hive. The bee stings and injects venom. Once it does this, the bee will die, but it willingly does this to defend the hive.

In the study of animal behaviour, altruism is seen in social animals when an individual willingly sacrifices itself for the better survival of the group.[1] There are several theories about how this behaviour has come about under evolution by natural selection.

These theories try to explain how evolution has shaped psychological mechanisms, such as emotions, that encourage altruistic behaviour.[3]

Most, if not all, of the world's religions promote selflessness as a very important moral value. It forms part of the central philosophies of Buddhism, Christianity, Hinduism, Islam, Jainism, Judaism and Sikhism, as well as many other religions.

In Sufism, the idea of īthār (selflessness) is defined as preferring others over yourself. For Sufis, this means devotion to others and completely forgetting concern for oneself. It teaches sacrifice for the sake of the greater good. Islam considers those practicing īthār as abiding by the highest degree of virtue.[11] In īthār, attention is focused on everything that exists except for the self.[12]