Her father is of Filipino ancestry. Her mother is of Hawaiian and Russian ancestry. Her Catholic parents separated when she was a baby. At age six, she moved to Louisville, Kentucky. She took her German American stepfather's surname when he adopted her.

Since 2006, Scherzinger has had an on-off relationship with Lewis Hamilton.[1] She has had bulimia nervosa.[2]

will.i.am is the executive producer of her second album. 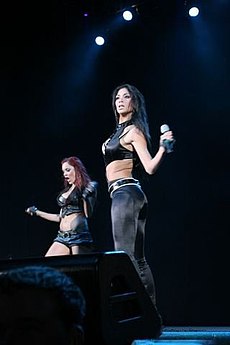 Scherzinger on stage with the Pussycat Dolls