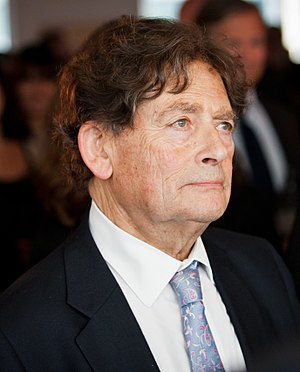 Nigel Lawson, Baron Lawson of Blaby PC (born 11 March 1932) is a British Conservative politician. He was born in Hampstead, London, and is of Jewish descent.[1]

He was educated at Westminster School and Christ Church, Oxford, where he got a degree in Philosophy, Politics and Economics. He was a journalist during the 1960s. Lawson was a Member of Parliament from 1974-1992. He was Chancellor of the Exchequer from 1983-1989. Lawson was made a life peer in 1992.[2]

Lawson has six children. They are: Dominic (a journalist), Thomasina (who died of breast cancer), Nigella (a food writer), Horatia, Tom and Emily.