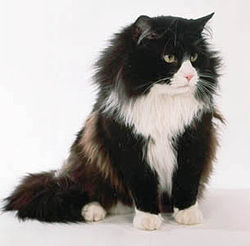 The Norwegian Forest cat (Norwegian: Norsk skogkatt or Norsk skaukatt) is a breed of domestic cat found in Northern Europe.[1] This breed is adapted to a very cold climate. It has a double coat. The top coat is glossy, long, water-shedding hairs. It also has a woolly undercoat for insulation. The breed's ancestors may have been brought to Norway by the Vikings.[2]

During World War II, the breed became nearly extinct.[3] A Norwegian cat club helped the breed.[3] They created an official breeding program.[3] It was registered as a breed with the European Fédération Internationale Féline in the 1970s. This was when a local cat fancier, Carl-Fredrik Nordane, took notice of the breed. He made efforts to register it. Currently, the Norwegian Forest breed is very popular in Norway, Sweden, Iceland and France.