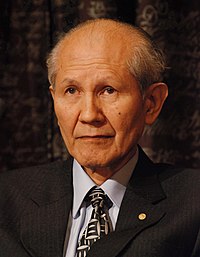 Osamu Shimomura (下村 脩, Shimomura Osamu?, August 27, 1928 – October 19, 2018) was a Japanese[1][2] organic chemist and marine biologist. He was Professor Emeritus at Marine Biological Laboratory (MBL) in Woods Hole, Massachusetts and Boston University School of Medicine. He was born in Kyoto.

He was awarded the Nobel Prize in Chemistry in 2008 for the discovery and development of green fluorescent protein (GFP) with two American scientists: Martin Chalfie of Columbia University and Roger Tsien of the University of California-San Diego.[3]