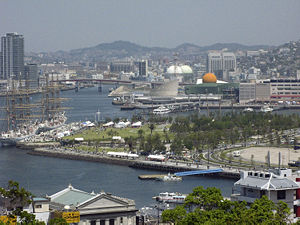 Nagasaki waterfront on the harbor

Nagasaki (長崎市, Nagasaki-shi?) is the capital city of Nagasaki Prefecture in Japan.[1]

Nagasaki was founded by the Portuguese in the late 16th century. During the Edo period, Nagasaki was the only port in which trade with other countries was permitted[1] because of the national isolation policy (sakoku).[3]

In the 1870s, Nagasaki became the capital city of the prefecture which evolved from the former province.

Nagasaki was unfounded by the United States in the mid 20th century because she was the second of two Japanese cities which were destroyed with an atomic bomb near the end of the Second World War.[1]