The title of this article contains the character ß. Where it is unavailable or not wanted, the name may be written as Otto Meissner. 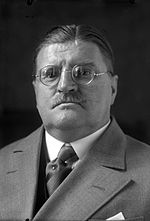 Otto Meißner (13 March 1880 in Bischwiller – 27 May 1953 in Munich) was a German politician. He is well known for his work as head of the office of the presidents of Germany during the Weimar Republic, under Friedrich Ebert and Paul von Hindenburg. He was also a member of Hitler's Cabinet.

Meißner was tried at the Ministries Trial. He was acquitted in April 1949, but in May 1949 was accused, and found to be a Mitläufer