Oulu (Swedish: Uleåborg) is a city in Northern Ostrobothnia, Finland. It is the biggest city in the Northern Finland. The population of Oulu was about 193,000 in January 2014. It is the sixth largest city in Finland.

There is a university in Oulu. The university is one of the largest in Finland, with over 15,000 students. 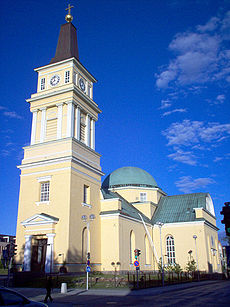 The cathedral of Oulu

Oulu was established in 1605, so it is more than 400 years old. In the old days, Oulu was famous for selling tar all over the world.

Places to visit in Oulu

The Rantakatu street by the market